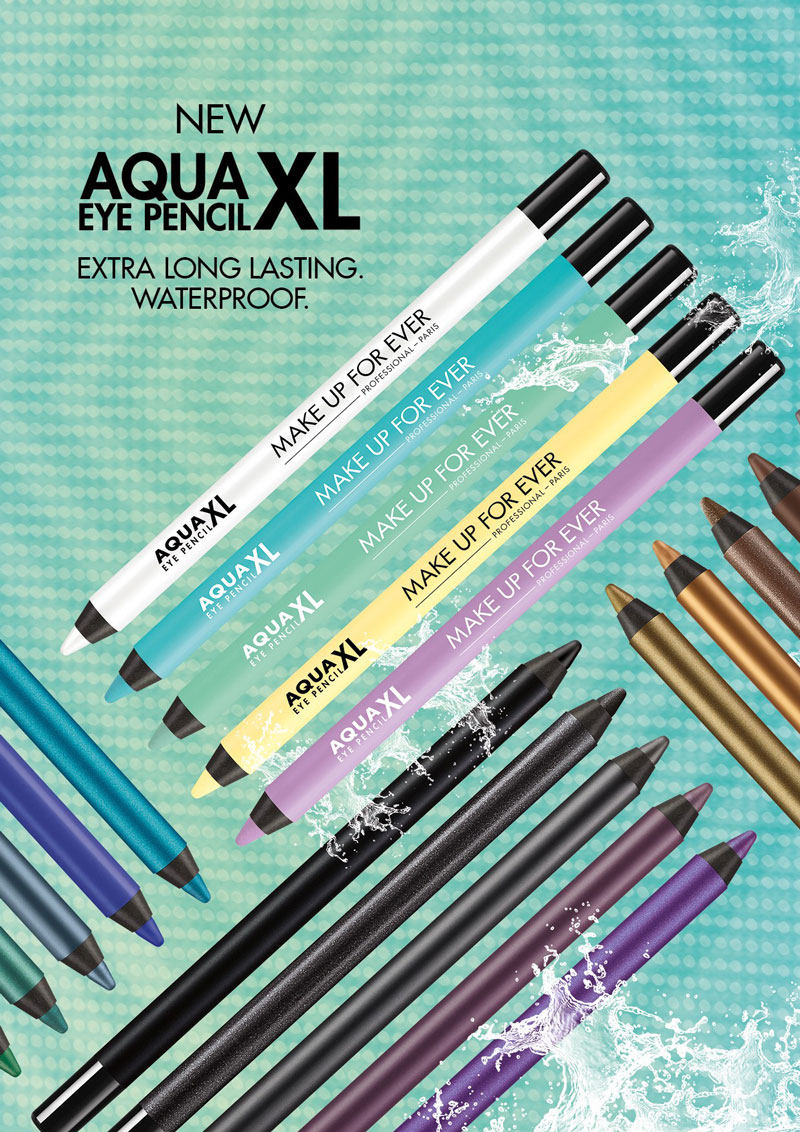 AQUA XL: the performers’ franchise: in 2016, MAKE UP FOR EVER goes a step further in its waterproof and long lasting products expertise. The emblematic franchise AQUA becomes AQUA XL to answer every professional’s needs: products that last throughout any performance. On stage, on catwalks or in front of cameras, AQUA XL resists in extreme conditions!

AQUA XL eye pencil, colors that stay all day long: MAKE UP FOR EVER renews the star product of the franchise, Aqua Eyes, with a modern formula. In water, on stage and on camera, AQUA XL eye pencil was tested by every professional in the industry. And as daily life is also a performance, the 20 shades of AQUA XL eye pencils will suit every women looking for extra long lasting products.

For use on the eyes, face, body and hands – get creative!!

MAKE UP FOR EVER announces a worldwide artistic collaboration with CHARLI XCX: the English pop artist embodies the performance of the AQUA XL franchise. Hit maker and song writer for worldwide renowned artists such as Iggy Azalea, Rihanna and Gwen Stefani. Charli XCX is the new pop icon. MAKE UP FOR EVER will accompany Charli XCX in her various artistic performances as her official makeup brand.

MAKE UP FOR EVER, the makeup brand which highlights stage artists: created for makeup artists from the entertainment world, each product development of the brand answered a specific need from the stage artists. MAKE UP FOR EVER brings its artistry and exuberance to the artists’ contents.

Charlotte Emma Aitchison (born 2 August 1992), better known by her stage name Charli XCX, is an English singer and songwriter. Her music draws from multiple genres; mainly pop punk and electropop.
Charli mentioned Debbie Harry and Eminem amongst her influences, adding that "the best artists are the ones who constantly change—Madonna, Bowie". XCX's music has been compared to the music of the 1980s with "the spookiness of Siouxsie Sioux" or "flawless early-Madonna".

Charli XCX's major label debut album, True Romance, was released in 2013, accompanied by singles including "You (Ha Ha Ha)" and "Nuclear Seasons". She rose to international prominence during 2013 and 2014 through featuring on two major hit singles: Icona Pop's "I Love It" and Iggy Azalea's "Fancy". Charli XCX expanded her portfolio of songwriting for other artists during this period, with credits on Azalea's 2014 single "Beg for It", Ryn Weaver's debut single "OctaHate", and material for acts including Sky Ferreira, Neon Jungle, Rihanna, and Gwen Stefani.

Her 2014 single "Boom Clap" became a top ten hit in various countries and preceded the release of her second album, Sucker, which also features the singles "Break the Rules", "Doing It", and "Famous".

AQUA XL range is available from June 2016 at Make Up For Ever, Clarendon Street, Dublin 2 and in our Online Shop click here